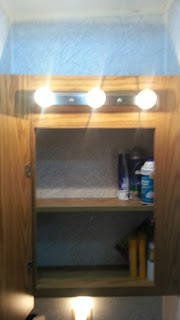 Made a huge mess getting the wires installed but isn't it pretty? 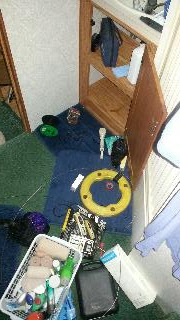 All installed. Ready for rain. 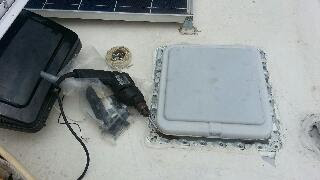 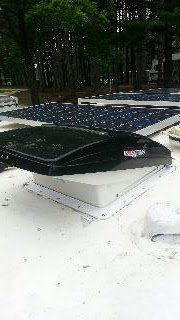 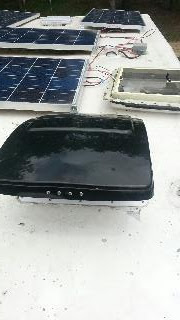 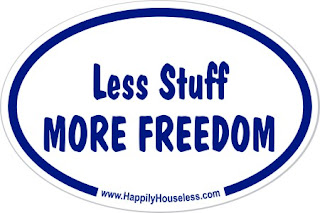 The guy who sells these stickers sold his house and moved into a class b van. I like his motto. You can buy the stickers here: http://www.happilyhouseless.com/ 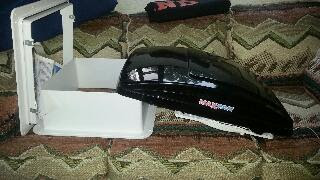 The lottery of life.

Someone asked me "how can you afford quit your job and go be a gypsy? "
I said "it's easy, I won the lottery,  yep $200 million". They said "you did not".
And they were right, I did not. But what if I had? No one would think twice about me quitting if I had won the Lottery. Money, is all the lottery changes.  What do you suppose I'd do if I had won? I'm thinking I'd do things I enjoy, have more fun, travel. I'd like to believe I'd donate a lot of money to good causes like curing diabetes. Something dear to my heart.
Life does cost money and I don't know of any way around that - but what I do know is it CAN cost a lot less money than most of us think. Also I believe that making money does not have to be work but can be fun.
So how can I afford to quit my job and be a gypsy?  I can't -  living my former lifestyle. I've drastically changed my lifestyle and I will still be occasionally employed.  But my hope is.......to never have to "work" again. I know I'm already appreciating things I used to completely overlook. There's incredible beauty all around us if we can just step back from the rush of making a living in order to fill our big house full of stuff......to see it.

Although I'm not yet “on the road”, I am living full-time in my 5er so technically I'm a full-timer. I want to document what I'm thinking after the first two weeks.
The pros:
Cons:

So that's about it thus far. Plenty to still do and learn but it's my starting point. So far I wouldn't trade it to go back.

One of my favorite memories as a  boy was the years I spent in scouting. It was a lot of fun but also taught me some things.
1. Be prepared.
People ask me all the time, "aren't you scared?" "Aren't you worried about what might happen?"
My answer is always, "Nope".  Fear does not exist and worry is a waste of energy. Danger exist and we must be aware of that but fear is not real.
Worrying is a choice and eight or nine times out of ten what we worry about never happens.
Rule one in scouting taught me how to alleviate fear and worry by being prepared.

My rule #1.
Every time a worry come into my head I ask myself this question, "ok, how can I prepare for that?" Then I do that. Sometimes it takes a long time to prepare but if I can't do it immediately, it goes on the to do list.

My rule #2.
Think of the worst case scenario and have a backup plan for that. As long as you have prepared an exit strategy you always have an out. Maybe not a great choice, but a way out.

People often tell me that I'm lucky because "at least you (me) can see the light at the end of the tunnel". I don't think of myself in a tunnel. I see myself on the path of life. I've been just trudging along on the well worn path heading for the typical eventual goal. There have been y's in my path. Occasionally I took one but most times not,  I just "stayed the course". This time there is no "y". I'm simply stepping off the defined path and starting a whole new path, into the unknown. Others have done it and survived, some even thrived. It's not scary to me it's exhilarating. I'm sure there will be new paths. Some heavily used, some lightly traveled. I most likely will travel some of those at times, but for the most part, be blazing my own new trail.

I am beginning a new phase in life. I'm very proud of some of the things I'm accomplished thus far, others not so much but those experiences brought me here. Where I go from here is the choice I'm faced with now.

I'm not "brave" or "courageous" or "crazy". I've just decided to spend this stage of my life trying new things, experiencing new adventures, and most of all having fun. Instead of the drudgery that comes from doing what I thought, I was "supposed to do".