I got the dually back and what a difference!! It's starting, running smoother, and has MUCH more power. I have not got the bill yet......but I think it will be worth it! 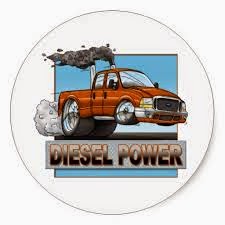 The new dually I bought seems to run fine, that is, as long as its warm out. I started noticing it starting harder as it began to cool off outside. Now that we have seen some temps in the 30's F it would not start.

I expected it needed glow plugs and probably a relay as those 7.3 litre diesels were kinda known for having issues. So I scheduled an appointment with my mechanic to change them out. He picked it up Thur eve and stopped by to see me at work yesterday. When he comes to see me, it's never good.

At some point in the past the area behind the turbo on the back of the engine has been on fire and several wires and various parts are burned or missing. Apparently, a squirrel or something built a nest back there and it caught on fire. The previous owner had to know this because the truck had been fixed just enough so it was impossible to tell it happened without removing several covers off the engine.  It can be fixed correctly, but when it's all said and done, it will cost about 8 times as much as the original fix.

Luckily, I paid far below actual value so I've got some room, just not expecting the expense. The good news is that once fixed it should start even in the coldest weather, run like a top, and see improved fuel mileage.

So all in all, I'm glad to find it now while I'm still working steady rather than after I get on the road.
Posted by Andy at Saturday, October 11, 2014 3 comments: